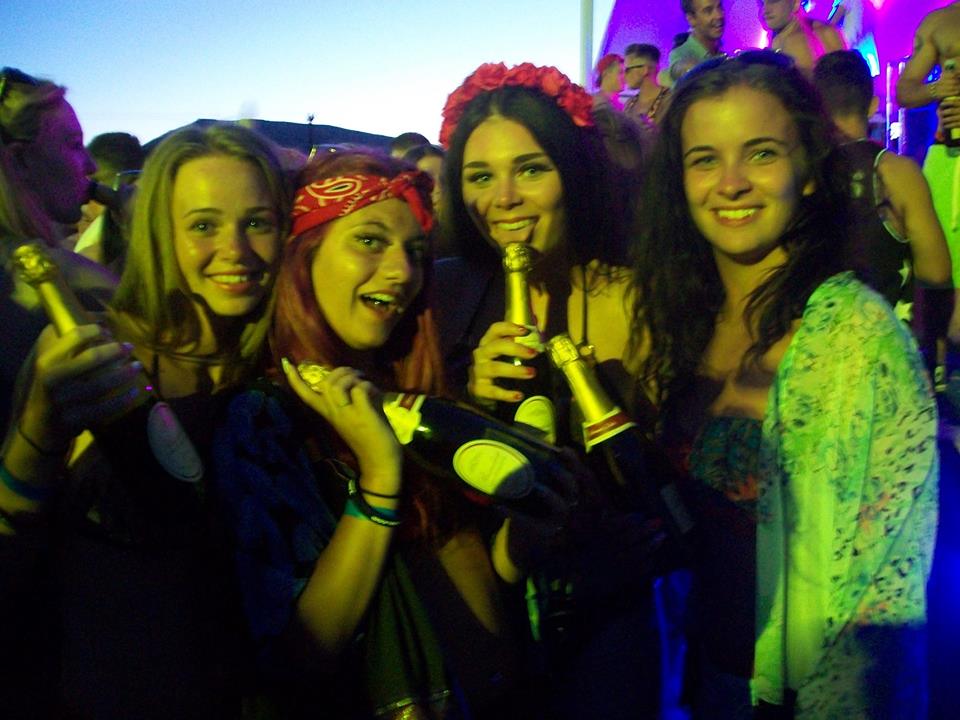 Buy Tickets
A Zante Nightlife Review
Inside by Crazy Week in Zante! By Project Zante’s very own Zante Lover – Lauren
Maybe you’ve clicked here by chance, are pondering for real reviews of Zante (if so you’re in the perfect place!)  over Google or the general internet, or if you’ve read, and loved obviously, my Day One introduction to Inside my Crazy Week in Zante! I don’t mind just as long as you’re here! 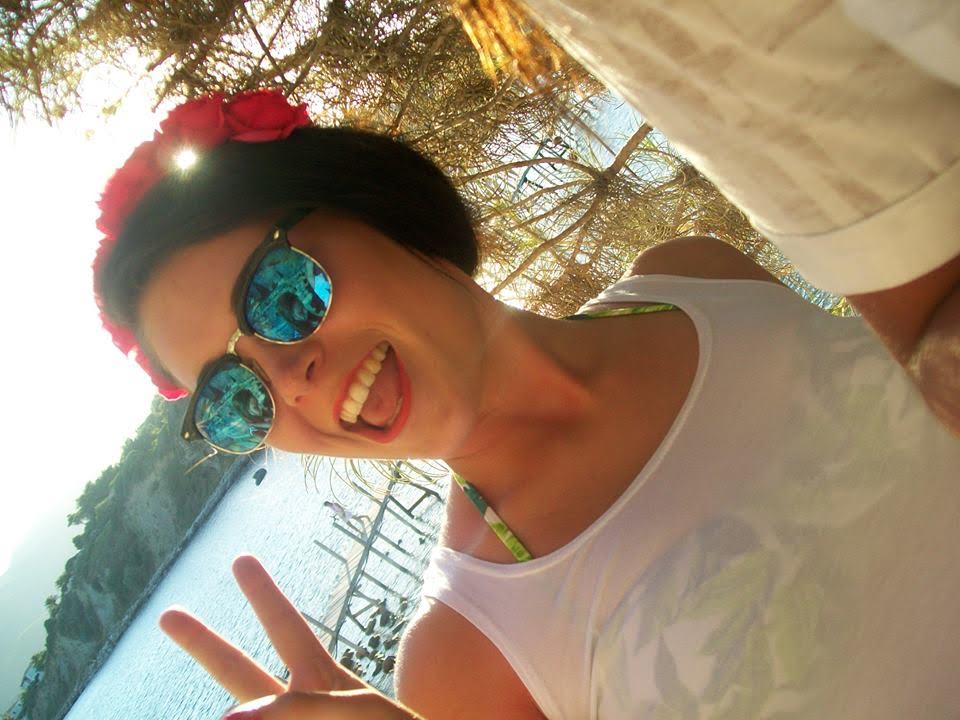 What did I really think of the ZANTE STRIP?

People running around everywhere, all drunk to their eyeballs

Some going to or leaving Paint or Foam Parties soaked, some have been drinking on Boat Parties since 12pm some who drunk a bottle of village wine as pre drinks (only 3 euros but guaranteed to make you feel like death the next day)

Some are crying because they can’t find their way home… some being sick!

Groups running around in fancy dress

Girls in hot pants and bras, some weirdo wearing a morph suit


Watch this video (from 30 seconds in) to get a full idea of how the strip looks at night! Just a little better than your local town right…

And as this was my first Girls Holiday, I had nothing to compare it to, but it was like nothing I’ve ever seen before! In England – you have a few bars together and travel a little bit to get to the big clubs in each city (apart from London!).

I’ll try and some it up.. imagine the most crazy night you’ve ever had at home…

Over 120 bars and clubs within a 1 mile walking distance

Thousands of people like you, some being carried, some barely standing, some off their faces but still fine and the odd boring one half sober!

Everybody wants to have the night of their lives

Plus all the fancy dress, laughing gas, crazy fishbowls and goings on above! 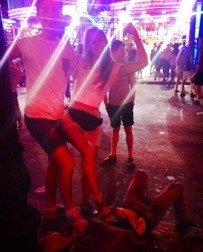 You literally see everything along this strip, but that’s what makes it so fun and unique! Everything goes, and everything is acceptable! If you don’t have your head over the toilet in the morning at least once or twice during your week I’m not sure I can say you did Zante properly!

You know you’re in for a great night as soon as you hit the strip… and everybody feels the same way as soon as they arrive. LET’S GO!

Wow, we we’re fuzzy this morning. But no time was wasted; we all soldiered on down to the pool after a cold shower to wake us up! We had our breakfast, do a numbers count to check everyones with us and down a quick fruit juice – the healthiest part of the day, and back on it we went. Well, we were on holiday?

– We were all inclusive by the way, It was such a relief and saved us so much  time, rather than having to head out and find something to eat – we had it all at the bottom of a lift journey to the lobby. It was so ideal 🙂

We all pondered on what we should do today/tonight but mainly here’s your choice for the daytime:

Chill out by the pool, ideally lying on a lilo with a cocktail in hand, occasionally get splashed by other groups feeling well enough to play volleyball in the pool!

If you’re feeling spritely enough, take a wonder down to the strip in the daytime and have an explore… it looks rather different during the day to say the least!

And then the all important questions – where should we go tonight? Should we dress up?

We we’re so inspired by the random fancy dress last night that we decided to nip out and get some face paint! You can’t go to Zante and not have neon dots around your eyes – right?!

Whilst we were shopping, we also bumped into a couple of promoters on the strip. They all looked a bit rough (as in, they totally went out last night and would rather be in bed right now) and so we knew they had experience of Zante and might be able to give us a few hints n tips on what to do.

We also headed to the beach that day to see what it was all about. It wasn’t the best sunny day to do it, but it was still hot and there wasn’t any rain so it was kind of like an English summer’s day?! We’re used to that kind of weather! Quick fact to make you excited… Zante gets roughly 3 days of rain between May and September … how awesome is that! 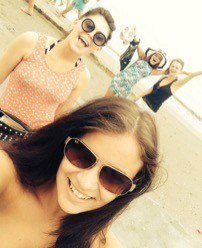 After a wander about, we started to get ready and get all excited for our second night in Zante!

With neon eye paint in toll, we headed for another bar nearby the hotel for some pre’s. The name of this place was ‘Cream’ – it didn’t look very busy at the time, as we figured people probably don’t go out until around 11pm each night, but that was a good thing for us as we had some serious drinking to do!

Cream is a futuristic looking venue, with loud and buzzing music and plenty of room for a boogie! The cocktails and mixers we’re cheap and there were gas girls in the venue which was great for us – no queues and some balloons! 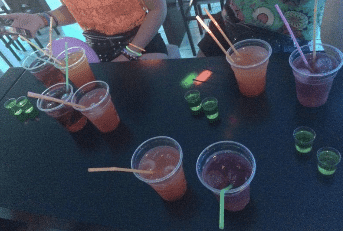 Next it was off to a bar called the 3 Lions. It’s actually a sports themed bar on the main strip, and they usually show the match of the day of football games! BUT when the games not on they do amazing music, the type of music where you know all the words and jump around like a loon, everyone’s dancing around, playing beer pong, singing badly  and drinking lots and lots of cocktails & shots. Sounds good right?

The whole club was screaming to songs like The Fratellis – Chelsea Dagger Google it, if you know, you know! This bar was packed right out, and it was one of those with a roof but no windows? Which meant one thing = no air con, very hot!

We only lasted around an hour in here before we almost died of heat, especially with bopping around and almost losing our voices from all the singing (screaming!!)

The clubs arn’t just stuck to the inside either in Zante because the weather is actually good! Here’s a couple of pictures to show you what I mean…

There’s so many you HAVE to go to that you won’t be able to actually go to them all if you’re only in Zante for a week but Zeros, Rescue, Cocktails & Dreams, Fishbowl, Plus and Cherry Bay are some of the faves to name just a few!

So I don’t know about you – but when my friends and I get drunk and it comes to 6am/7am and we’re not ready to go home, we’ll automatically go and skinny dip! It’s like a traditional ritual in the group! 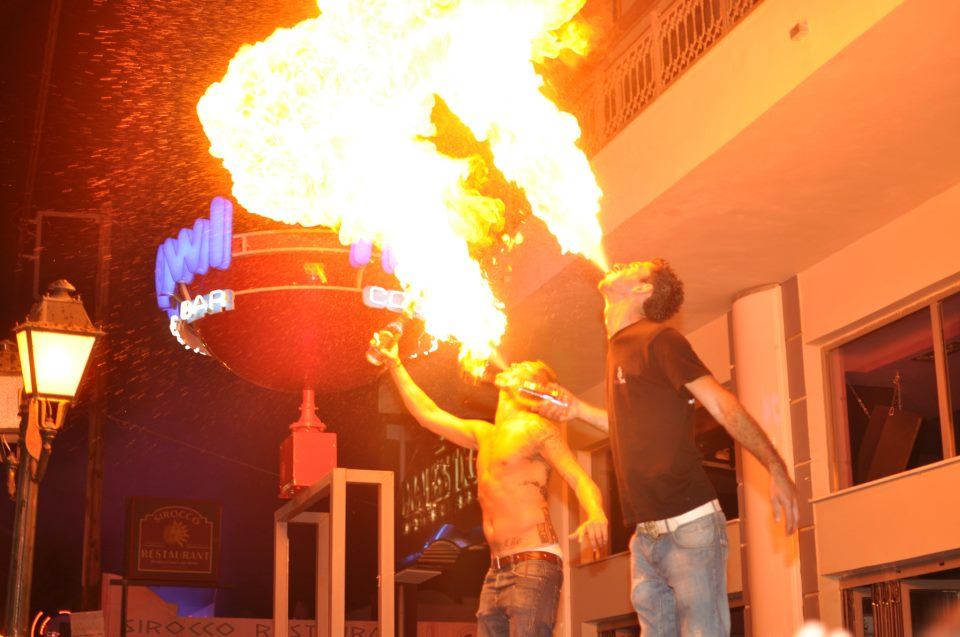 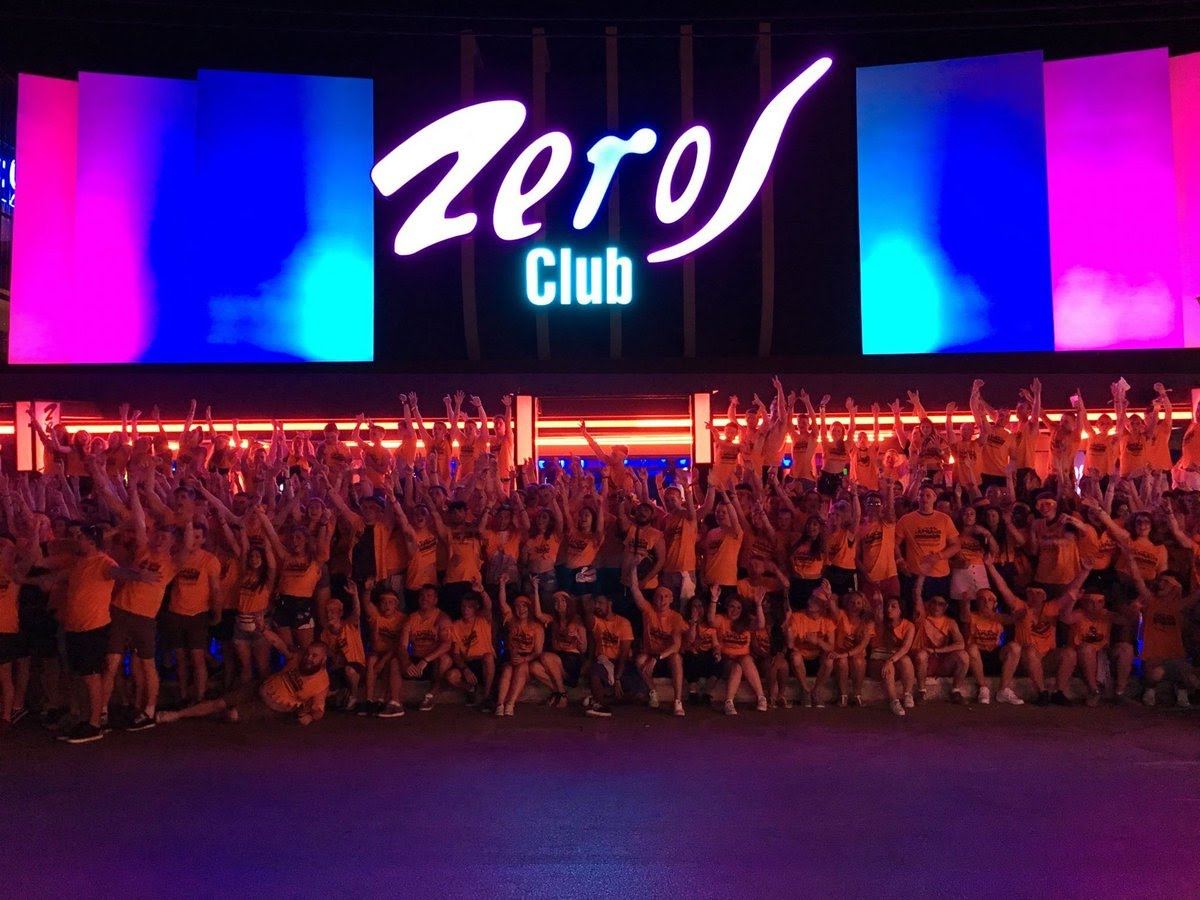 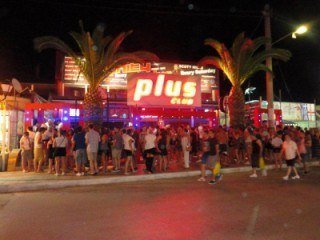 There’s so many you HAVE to go to that you won’t be able to actually go to them all if you’re only in Zante for a week but Zeros, Rescue, Cocktails & Dreams, Fishbowl, Plus and Cherry Bay are some of the faves to name just a few!

So I don’t know about you – but when my friends and I get drunk and it comes to 6am/7am and we’re not ready to go home, we’ll automatically go and skinny dip! It’s like a traditional ritual in the group! 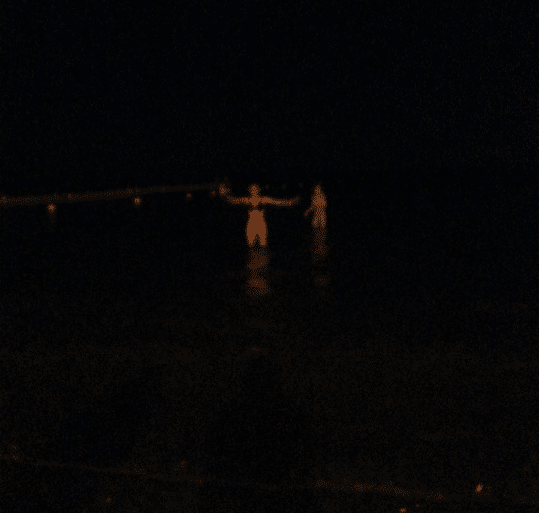 The sea was still so warm, and some of the lads from Plymouth also joined us. You could spot them swimming out to parked up boats, climbing on board, and jumping off! It was such a laugh. I also have something to tell you that you can email me saying thank you for once you’re back in Zante!

Do NOT leave your clothes, phone & money by the sun loungers on the beach when you go skinny dipping… there’s a good chance with the gypsies they will be not be there when you get back! Just pop back to your hotel before popping back down to the beach 😉

… but just in case ya fancy something else and you’re not done with me or Zante yet, here’s a few links you’ll enjoy reading!

Click here to get your Free A-Z Zante Guide straight to your phone/inbox
Read my top 5 tips for the girls in Zante (maybe for the boys too!)
Day one of my week in Zante…
See some of the best & worst 18-30 hotels on the strip here

Get the full 2019 Calendar for Zante Events

See the Sell out events so you don’t miss out!
Individual event pages, spending guides & more to get you excited!
Sent to your phone so you can go back & check any time!
Advice and Zante guides to make sure you’re prepared! 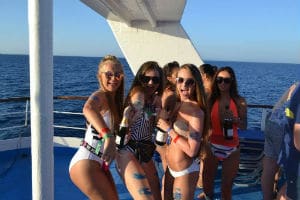 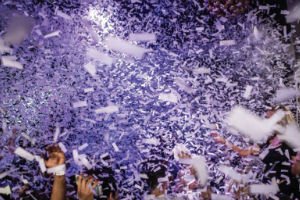 2000 People. Zante’s biggest club. Every Friday. Get earlybird admission and avoid missing out or queueing for ages on the door. Want a VIP table with exclusive extras? No problem.  A must do when you’re in Zante! 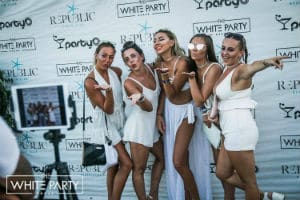 The White Party is one of Zante’s biggest events. Held at the fantastic Republic Beach Club it’s all white sexy theme, big name DJ’s and classy venue will make sure you have an amazing night. 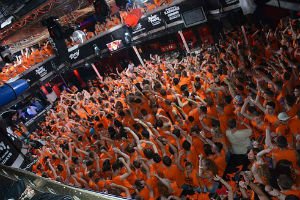 INSANE. Europe’s biggest var crawl turns the strip orange every Sunday and is as mad as it sounds. Race across different bars with a free afterparty including a discounted bar all night for the first 50 winners back from the race. 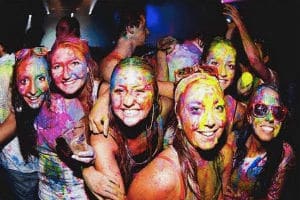 The Ultimate event in Zante for getting covered in paint and dancing all night off your face! From 11:30pm until the morning and held at one of Zante’s best venues! 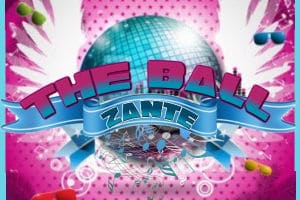 Zante’s sexiest event! Every Saturday it’s time to show off at the All Underwear Ball. So don your best outfit (with a little underwear showing) and get ready to go wild! Strict girl:boy ratio in place during all weeks so don’t miss out on booking early! 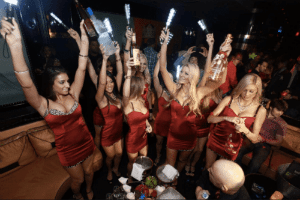 VIP Table and Drinks Packages or bottles waiting on arrival! Whatever you need, it can usually be done! Check out the set packages and all access pass here! 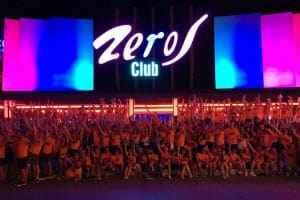 Want a Zante Events Package? See 7 different ones right here including the Full Package and packages perfect for your budget! 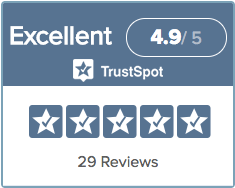 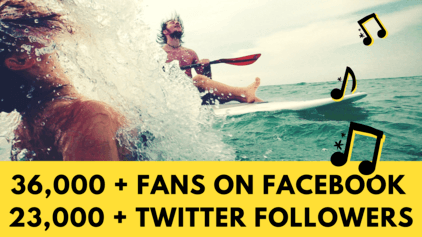 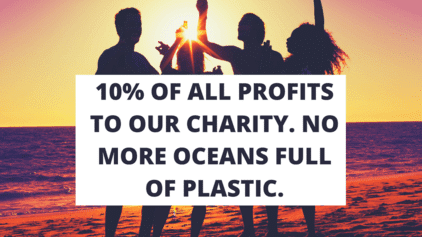 Why do you donate 10% of profits to charity

Hi, James here! I’m the owner of ProjectZante. I wanted to answer this question first because it’s important. Our oceans are in great danger from the pure amount of plastic disposed in them every single day. I wanted to do something about it, and I think, many people who are coming here to Zante want to as well! If you hate giving to charity, buy your tickets elsewhere! We still guarantee the lowest price on EVERY ticket we sell! Thank you and lots of Zante love!

How do we use tickets once they're delivered?

Every ticket is delivered via email within 24 hours. So straight to your phone or laptop. All you need to do is simply print them out, and for some events you can simply show them on your phone. Happy days!

Guess what? We all lose stuff, all the time! So we never charge you if you lose your tickets either before you arrive in Zante, or once you arrive. We can either just resend them to you if you email info@projectzante.com or reprint them for you if you need a copy in resort 🙂